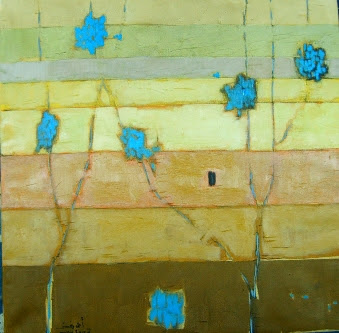 Kliem of the South, Ahmed Nussaif


What are those candles that no one seems to see?
In the presence of such lights
people were looking for lamps to buy.
Then the seven became one,
in the middle of the sky's rim.
Then that fanned out to seven again.
There were connections between candles
that cannot be said. I saw, but I cannot say.
They became seven men and then seven trees,
so dense with leaves and fruit no limbs were visible.
Flashes of light
spurted from each fruit like juice.
And most marvelous of all was that hundreds
of thousands of people were passing beside the trees,
risking their lives, sacrificing everything,
to find some scrap of shade. No one saw
the trees with their tremendous shade.
Posted by Ruth at 12:01 AM

Ahhh...thank you, Daquqi; I begin to understand (a bit.perhaps). Why can we not see the magnificence of what is already present? Why must we search for what we do not need (but desperately believe that we require)?

Hello and welcome, some-place_far. No, I don't know Arabic. I type the translations here that Coleman Barks did. I hope you continue to enjoy Rumi's tremendous writings here.

Im so using your quotes,your signature to my FB stats ! :)
yes I have put your page on the fav. bar !